If you're not sure what kind of roof coating you need, you might want to first get familiar with your various options in this article - Different Roof Coating Options for Your Commercial Roof

So the first thing we do with the gravel roof is we get rid of the gravel. A lot of roofing contractors may want to just tear the roofs off, but it's really better not to do that because of landfill waste and things like that. Also, you want to maintain your existing insulation. But if you were to go over this existing gravel, the real problem is weight. So by getting rid of the gravel you're getting rid of two hundred pounds per square. A TPO system is very light - more like 40 pounds per square, so it's worth the effort to get rid of the rock and keep the roof.  commercial roof coating

After clearing the gravel, we'll put down insulation and then after that we're going to put down the single ply system TPO over gravel. The next thing we do after the roof is swept is we put down is half-inch insulation. This is basically a buffer so that nothing from underneath can get through, if there is pebble there or anything, it won't poke through. So this goes on the whole roof. 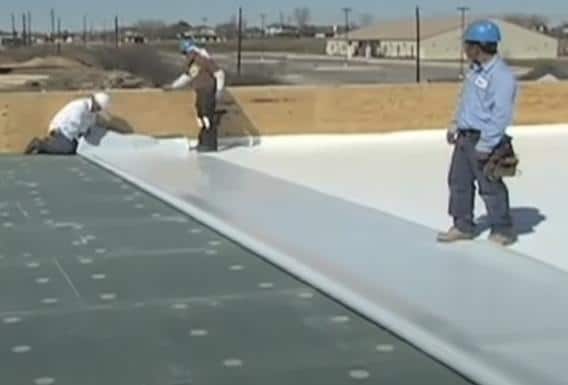 Then we go to adding the TPO at 60 mm. It cannot be ripped - it's very formidable. This stuff should last 50 years

Once they start getting the TPO on the roof surface, they start heat welding, which is the next phase.

Let's discuss how this gets adhered and fastened to the deck. When things are set up, you'll see screws and wide plates that are about 8 inches apart, all along every single seam on the roof. Then the next row comes on will overlap the first and will be heat welded together. When it's done welded seams will be just as strong as any part of the material sheet.

The way it's kept down is at one side of the six or eight foot sheet it gets screwed down with the plates attached to the deck. That way it can't come up - the wind can't blow it up. So once the sheets are heat welded together, the whole thing is stuck to the deck.

Every every pipe flashing and every penetration gets dealt with individually by an individual installer. He heat welds individual strips to make a watertight boot around that particular vent or protrusion. Square shaped boots are usually manufactured right on the roof as needed. For a pipe or other circular protrusion, you'll get a prefabricated conical boot. Those get heat welded down at the base, right to the top deck layer, and is really your only point of concern. The top portion, where the vent pipe exits, gets a fifty year caulk on it and then it gets a band like you would see a hose clamp in a car, and that gets tightened down making a seal that is good for the duration of the roof.