Assessing a Leak on a Tile Roof

In this article we'll be looking at the first stages of fixing a roofing leak on an s-tile roof.

It's not uncommon to find that one or more tiles are out of place. They can slide down and expose the felt paper underneath, and will basically lead to the paper or underlayment to become deteriorated.

The felt paper inside runs down underneath the tile, down slope and is really wreaking havoc down the slope of the roof to the exterior wall, above the header to the slider down below. So with a common situation like this, we'll walk through a step by step process explaining how to do a leak repair on a tile roof.

So the first thing I do is I come one row up from where the leak begins. And I come over a couple of tiles and I'm going to pull on all the tiles surrounding the one in questions and loosen them up a little bit. So I get the nail that's holding these in place a little bit loose. Then I get my flat bar underneath a bit and then pull that nail out and then slide these tile out. 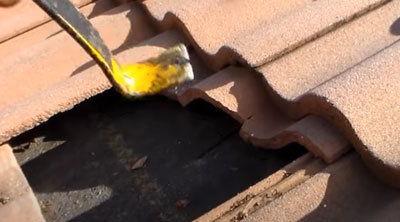 Once you've loosened all these tile around the leak area, go in and pull the nails out and start pulling the tile out of the area and coming down to roof slope. And again, stack those tile off to the side.

Once you have separated this tile with a flat bar, get a hammer under it. Just take your hammer, slide it under and turn the handle to hold a space to hold that tile up. And then you can use your flat bar to get underneath the tile to find any nails.

At that point you're going to get a flat bar underneath that nail head and pull off the nail. And that begins the process of of pulling the nails out of the surrounding area tiles.

You'll want to do the same process with all the tile coming across up above the leak so you have a good working area. You'll then be able to properly assess how bad of a leak you're dealing with.

When the tile is removed, you can cut out the felt paper and see how big and how bad the damaged area is. If the plywood is really damaged, you'll just want to replace that section. Knowing that it's 16 inches on center from rafter to rafter, you might work with a couple of 4 foot wide plywood panels as replacements where you'll block the seams in the middle and nail them off on the rafters.

But when you have to cut a good bit of wood out, you'll want to cut the felt out far enough to get to those rafters so you can pull the nails and get the old wood out and put the new wood in.

A lot of a lot of contractors will try to sell the homeowner a premium rated felt paper, which is not necessary. And I have learned over the years that the primary reason why they do that, why they try to up sell the underlayment, is because they don't have confidence in their guys to install the tile properly.

When you're seeing bad leaks on a tile roof, it could well be that somebody neglected to nail down the tile properly. It could be that it was broken at one time during the installation and somebody replaced it. But when they replaced it, they obviously can't nail it because the nail hole is hidden up underneath. In a situation like that, the tiles are supposed to get glued in place.

This is the typical lack of quality control you see in a lot of roofing contractors. And this is how a bad installation, bad labor, can result in an eventual roof leak. And this is why they may have tried to up sell the underlayment, not because the standard underlayment is not sufficient - it is if the job is done properly.

With properly installed tiles, even after two decades of wear and tear, if you look at the standard underlayment, you will likely see it is still in perfect condition where there is nothing wrong. It will still be plenty thick, it'll be flexible, and it should be able to last anywhere from 50 to 100 years, provided your tile is installed properly. But when it is not installed properly, that's when you end up with the felt paper wearing out.

And that's what other contractors are trying to prevent from happening. Instead of making their guys do the installation correctly, instead of sending a supervisor out on the job to make sure they do it right, they just up-sell the homeowner on the underlayment. So enough about that. It's just one of my pet peeves. I despise that fact. And I wish that more contractors that would take more pride in their work and make sure that the customer doesn't have to pay for things like this in the future, and not have to pay for premium underlayment because they really don't need it, provided things are done correctly.

How To Re-Lay An Old Tile Roof